Pix by Out&About with Dayv

Over my camping and travelling years I have met and become friends with a great group of like minded individuals and couples. Afterall, it really is the people you meet along your travels that make for a truly rememberable journey. I still think the best things I’ve ever learnt have come from those travellers I’ve met over a cold one at some off the map Aussie pub or sharing a brew at a great camping spot. Nothing can compare to good old experience, especially experience that comes with making errors and learning from them, and then passing on that knowledge.

Which is why I have other knowledgeable contributors on the site that I call my friends and trusted travellers. Let me introduce them below.

In 1973, Bruce was stationed in Longreach when an old shearers cook swapped him a camp oven for a pair of police boots. In later years he found out the oven was an 11” Metters, which is a very collectable old oven. It was about that time he started to cook in camp ovens on a regular basis compared with todays cooking facilities.

The fun began in 2008 when Bruce and Patricia attended the Australian Camp Oven Festival in Millmerran, Queensland for a look. Bruce had other interests at the time but decided they would return one day and have a go at the camp oven cooking competition.

In 2014 The Gidgee Gang was born when they returned to compete in the Beginners Section of the competition at the Festival. The Gidgee Gang name was derived from the name of the timber they liked to use when cooking. Their famous savoury damper won first and their chocolate self-saucing pudding got second.

Bruce and Patricia continued to do a lot more cooking using camp ovens and built a bush kitchen at their home so they could cook with a fire regularly to refine the art.

In 2016 they returned again to the Australian Camp Oven Festival and managed to gain Reserve Champion place in the open competition.

They now provide camp oven cooking workshops (COC 101) at their home for interested groups and individuals. They also attend events throughout north and north western Queensland providing camp oven cooking demonstrations and catering for groups. One of their regular events is providing demonstrations and cooking Sunday night dinner for the old drovers at the Drover’s Camp Festival at Camooweal which is on the Queensland/Northern Territory border.

Patricia and Bruce own almost 100 different cast iron camp ovens, with one in collection being 1 of 6 ever made. It is 36” in diameter and weighs 175kgs, 90 kgs in the lid. It was made as a result of a mistake in the ordering for Alexandria Downs Station in the Northern Territory.

Dutch Oven Cook Off In The States

In October 2019 the Gidgee Gang travelled to Hillsdale, Illinois, USA to compete in the 3 pot cook-off at the National Dutch Oven Gathering. They were loaned the equipment required and in the worst cooking conditions ever (cold, windy and raining) they managed to get a first for their bread and a second overall.

They then travelled to Chandler, Arizona where they took part in the American Chuck Wagon Assocaition cooking event. They were guests of the Biscuit Flats host Chuck Wagon and provided cooking demonstrations, showing the Americans how to cook the Australian bushman’s bread, aka damper. Some commented that they thought the damper was better than their traditional American biscuit. 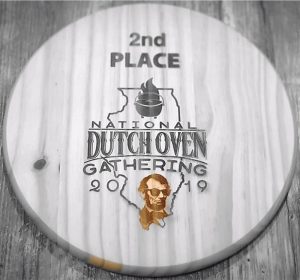 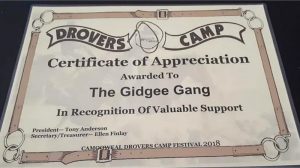 Grandson Matthew is amazed at the size of the oven