Add an Awning or Annex to Your Caravan 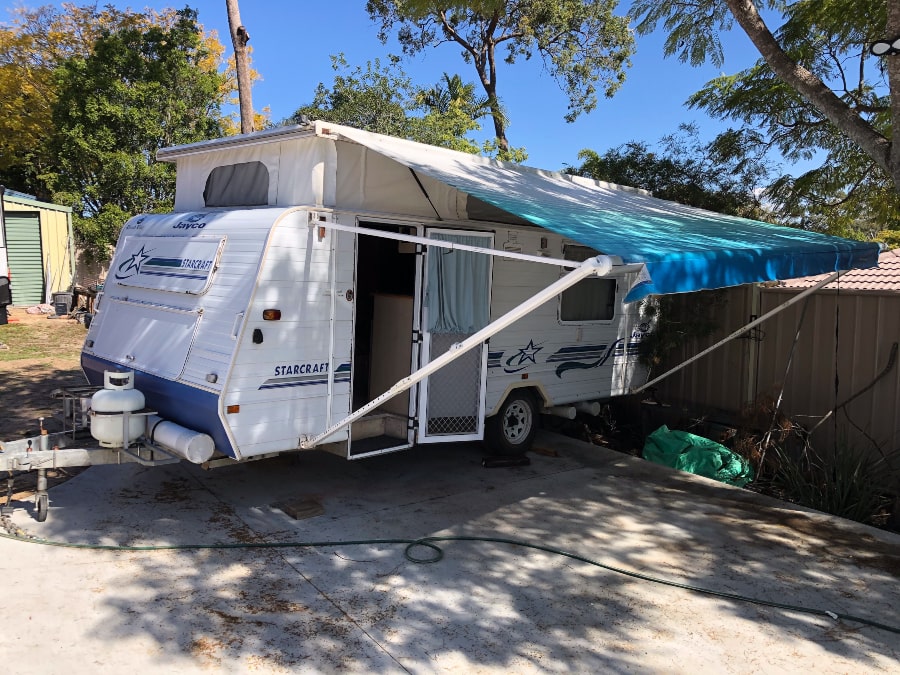 Roll-out awning on a 16’ pop-top van showing the triangle brace of the supporting arms of the awning and the sail track for side walls.

Hands up if you remember fitting the annex roof to the caravan using sail track or perhaps those metal sliding clips that went into a similar track – but each one had to line up just so.

Or perhaps you remember dad and mum (or your grandparents) doing just this.

Well, unless you are a ‘dyed in the wool’ traditionalist with a bondwood van or doing up a vintage teardrop, those days are well and truely gone.

With all the modern materials and components, there’s really no reason not to add a roll-out awning on your caravan.

Many new vans even come out from the sales yard with an awning fitted.

But, in my experience, there’s several aspects to consider when looking at a caravan (second-hand or new) and/or fitting an awning – or perhaps an annex.

I will treat the awning and the annex separately here.

The ‘awning’ is the roof extending from the side of the caravan.

The ‘annex’ is the wall component.

Naturally, you would not consider the annex without thinking of the awning – but you could just have an awning and no annex (ie no walls).

Sorry to go all boring here at the start but this is important!

The Queensland Government summarises much that needs to be considered here when it states that “Gas appliance flue terminals must terminate and discharge outdoors” (Source: ibid) – and this includes a situation where an annex is fitted.

Well, generally, it would be the flue (the vent or ‘chimney’) behind your gas fridge, your gas stove and oven, your hot water system and any gas heater.

Since July 2014, these flue terminals “cannot be terminated indoors (i.e. inside an annexe) — this is to prevent  excessive build-up from the products of combustion, condensation, or other  toxic conditions, such as carbon monoxide (CO) build-up” (Source: ibid).

This could be resolved by putting permanent ventilation in the annex walls.

All this is particularly important if you plan to put the kids (or anyone) to bed in the annex.

If you have a gas appliance in your van that vents to the passenger side (near side) of the van you need to talk with the caravan manufacturer or your annex maker to make sure it all complies.

Fixing and Sealing the Awning

Quite often the sail track that houses the roll-outer awning on your van is simply screw or rivet-fixed to the cladding or walls of the van.

If this is the case, you may like to consider asking for a bead of silicon to be placed behind the track when it’s installed – or put one along the top once it’s in place.

The issue here is that water can run down the outside wall in heavy rain.

When you are looking to buy a new or second-hand caravan, I suggest that you take a moment or two to look at the design of the van and see where they have positioned the windows and doors on the passenger side.

The chances are that the awning will end above (or near to) a window – or the door.

This perhaps isn’t a deal breaker for you and your needs, but it is something I would like to know you have considered.

The annex manufacturer may be able to cut short of the end of the awning or perhaps bring the side walls down the side of the van so that you can still open the window when needed.

The same goes with the door here. Just be prepared to open the door in the rain if the awning doesn’t reach that far.

Close it in with a Skirt

A ‘skirt’ is quite simply another wall to your annex. It clips to the side of the van – along the lower part of the wall and extends down to the ground.

This skirt closes in the annex and stops wind, dust and some insects from entering.

Doors in the Annex

With the typical awning design, the arms come out from the van as you unroll the awning.

These arms are usually hinged at the bottom of the caravan wall with a securing arm extending out (almost horizontally) from the van.

When these arms are extended and secured, they create a triangle brace that holds the awning taught and secure.?

However, these arms do tend to obstruct movement through the front and rear of the finished annex.

For this reason, some annex manufacturers put the zipped doors out from the side of the annex (eg the longer wall).

As caravan parks become more space aware (crowded) this side wall often leads you out to the side of the adjacent van.

Do You Pack up in the Wind

When the wind picks up, it is really your call as to whether or not you pack the whole lot up and bunker down.

If all you have out is the awning, I would hesitate to roll it in and take it easy.

If you have the whole ‘kit and caboodle’ out, you may choose to stake it all down and prepare for the worst. Perhaps bringing the stuff that could be damaged inside. 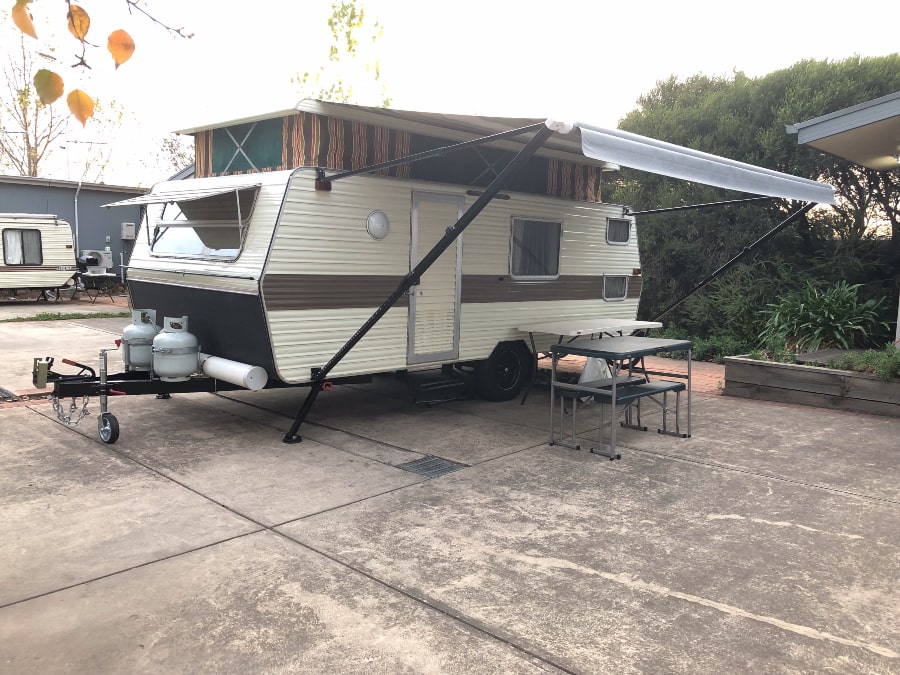 Older model van with retrofitted awning with no annex walls – looking smart and giving that modern feel. Note the possible conflict with bunk windows if a annex walls were to be fitted.

However, there will always be a time when a storm hits and you out exploring. Try and plan ahead, but don’t let the inevitable ruin your holiday.

De-flappers are clips that you place on the awning and tie back to an arm or perhaps even stake it down to a peg.

The idea here is to stop the wind from flapping the awning or take away the harmonic effect as the wind passes over it. Great idea.

But, in my experience, de-flappers tend to stretch the vinyl material – and once stretched, the material will never return to its original shape (albeit flat). It’s this new shape that then tends to flap even more that the original.

Then again, I’ve seen first hand the damage that can be done where the awning material meets the sail track or roll through this flapping and fatigue.

Again, if its windy, have a think about rolling your awning in.

On longer awnings (longer vans), manufacturers will often deign that a mid-distance batten be used to reduce sag and possible ponding in the rain.

Again, I would recommend only using a batten if you really have to. 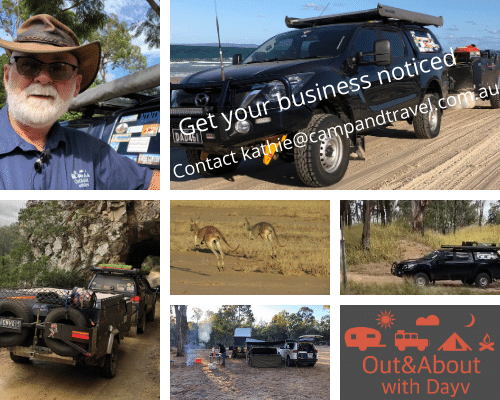 Again, from first hand experience, I’ve seen the stitching along the top part of the awning rot and break away. This leads to leaks along the top edge that run down the awning and drip into your rum.

This may be time to replace the awning.

But, for a cheaper option, I took the awning off the supporting arms (being very careful with the spring loaded mechanism) and slip it out of the sail track. Once off, I simply rolled the awning material over so that the stitching was no longer exposed and the top side no longer had holes in it. PS I found that the awning didn’t need to be restitched as it was held in place in the sail track by the nylon bead.

When it’s raining, or looks like rain (especially overnight), drop and end of your awning so that it won’t pond and fill with water.

It only takes one drop to pool and it will attract another… and another. This pool can grow and cause your awning to collapse or break.

Same goes to for going to bed after a bottle of red and not a sparing a moments thought for the weather – or is that just me…?

The annex is often the great leap for kids struggling for independence – and parents seeking ‘parent’ time.

Naturally, security can be an issue here as the umbilical cord is stretched that little bit further.

As our kids were growing up we would leave a window near our bed open so that (we thought) we could hear any strange noises outside.

We also put small padlocks on the zips to the annex doors and the poles on each side.

A good trick I heard one family do was to tied a row of empty beer cans (or soft drink cans if you can find them) to the annex door zips. If any one were to pull on the zip, then they would drag on the concrete slab. Just don’t share this one too widely.

Regardless of how you travel, just get out there and give it a go and have fun. 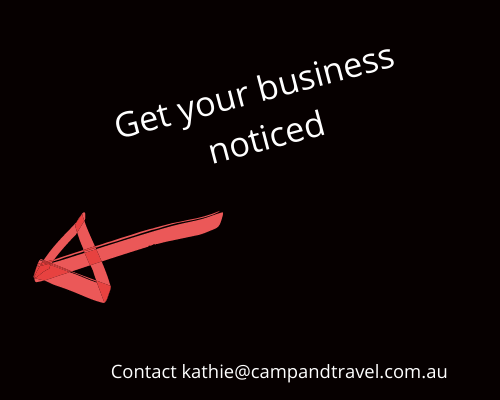 Get Noticed by Joining Dayv to promote your business

Camping Tip 35 How to protect the wine glasses