Observations from the Road During the Early-Post-COVID-19 Period

As I’ve posted previously, I recently escaped the warm climes of South East Queensland and took an escape-route drive over the border to Moree, down the Darling River from Bourke to Wentworth (both in New South Wales) and into deepest Victoria via Mildura, Bendigo and Romsey, staying at the Big4 in Coburg.

My return trip to Queensland, and self-quarantine after visiting Melbourne (and other areas) was declared a COVID Hot Spot, was via Jerilderie, Parkes, Dubbo, Moree, Boggabilla, Tenterfield, Jennings and into Queensland.

I must admit that part of my reason for the trip was to see what I could see in terms of the parting of the COVID ‘curtain’ as Australia was trying to find its stride in lifting isolation requirements and border crossings etc.

Yes, I must also admit that I also had a burning urge to travel the Darling River… and to visit our daughter in Melbourne… and to just… well, just get away.

What I found may be of interest to you as a camper and traveller.

Why Travel and Where to?

Perhaps the biggest trend I found on my travels was that many people I asked where they were going and why – their response was that “They didn’t know’, That they didn’t care” and that “They just Had to get out”. Best of all, many had no real plans on a return date. Way to go…

For some, it was a serious matter of mental health. One lady I spoke to felt paranoid at home and fearful in that people around her didn’t take matters during the pandemic seriously enough for her comfort and her state of physical health.

My big tip to anyone looking to get a little off-grid and travel the back roads and small country towns would have to be – go to the toilet whenever you can.

With many smaller towns locking up their public amenities due to concerns around not being able to adequately clean them. Similarly, shops have taken to keeping their toilets for their own use – fearing your COVID ridden cheeks coming into contact with their shiny seats (and vice versa I suspect).

As such, I found that it was better to stop on the side of the road about 5 kilometres out of town. This saved me the hassle of looking for somewhere in town and taking the risk of it being shut or too far to scurry to.

For the ladies reading this, and I hope things improve, you may like to make a small investment in a ‘female urination device’ such as Shewee. Sorry, but I’m just putting it out there.

But, certainly carry a shovel or spade and some toilet paper just in case.

When girls need to pee head to Tentworld. And for the all essential shovel Tentworld has the solution.

Having said all that… its is quite pleasant to see that, of those toilets that remain open to the public, the vast majority are perhaps cleaner that I have seen many before. Perhaps, as many are now saying, they’re being cleaned to the standards that they should have been cleaned all along.

Then again, the toilets at Woolworths, Coburg in Melbourne have a lot of work to be done.

I haven’t done it myself too much, but I do know that some petrol stations will offer bona fide travellers the use of their showers. However, in these times of COVID carriers still walking around, the use of showers at petrol stations is being closely limited to transport workers / truck drivers. So much so, that people wanting to use the showers need to show their drivers licence to show the class of licence they hold.

It was the case during my trip into Victoria that, when it came to shared showers in the caravan parks, shared shower blocks were locked off altogether. To this end, campers were only allowed to stay if they were fully self-contained.

For me, the BIG4 Parklane at Bendigo offered me an en-suite site for the price of a powered site. This was a terrific offer and I thank them for it again.

Similarly, the BIG4 Melbourne Holiday Park in Coburg set me up in an en-suite site for my stay.

This requirement around shared amenities has now been lifted, but you may like to see what they’ve come up with in Jerilderee.

In the absence of any considered clear guidance on shared showers and amenities in New South Wales, the Jerilderie Motel and Caravan Park took up the fantastic initiative of declassifying the men’s and ladies’ amenities as male and female, and declared each of the individual toilet stalls and showers as being dedicated to a campsite / family. In this way, each visitor had an en-suite that was cleaned twice a day. Perhaps the saving grace here was that they weren’t booked solid and that the toilets and showers extended down to the floor (ie there was no gap at the base of the dividing walls). Give Ally and Mark a yell if you’d like to stay at Jerilderee – and mention that I sent you.

Otherwise, I was happy with my bush showers and creek dips when I needed to on the road.

Interestingly, while debate rages over state and territory borders, border closures and quarantine requirements, smaller communities can be seen to be pushing back at the local level and asking visitors to only stop if their need is essential. I found this at Wilcannia (NSW) and I’ve seen the same in a post regarding the small town of Menindee (NSW).

Click above for a direct link to female urination device.

Then there’s the constant stares that I got as I drove with Queensland number plates around New South Wales and Victoria. I don’t think they were angry – just sympathetic that a Queenslander would venture south in Winter – pity perhaps.

With all the social distancing requirements, you’ll find that here too further sub-borders have been established to separate areas of pubs for its patrons and staff.

Keep a Diary of your Travels

A big tip would have to be to keep a diary of some sort. Either that or take lots of photos with your location details turned on.

I say this because you will be asked time and time again where you have been in the last 14 days. This gets harder as one bottle of rum fades into a bottle of red at each stop – or was it bourbon? 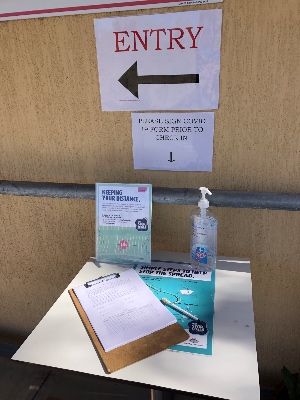 I found it always reassuring to have a small bottle of hand sanitiser in my pocket and one back at the car. It never hurt to have a quick couple of sprays or a squirt after filling the tank with diesel or touching way too many door handles.

Finally, and I’m not saying to delay your adventures but… Just be prepared to accept that some areas may not yet be ready for the influx of visitors as the travel restrictions lift.

This became very apparent when I stopped at a roadside campsite in a Paroo-Darling National Park where the camp areas had not been maintained.

Not to say that I blame the staff and crew here. I fully appreciate that everyone has been redirected to other tasks during these times. all I ask is that travellers and campers take this into consideration when planning your trips – phone ahead and be prepared.

You may also find that camper numbers have been severely reduced due to social distancing requirements. For example, the Yanda Campground on the banks of the Darling River was limited to 10 people in an area the size of a football field. Perhaps due to the supporting amenities.

You may also find that National Parks now require you to book online before you arrive. This may be difficult if you’re actually on the road and out of internet access.

That reminds me, you really need to get in the habit of booking ahead and even just making the phone call. You can use the Interweb, but I’ve found that sites are not always being kept up to date during these times of flux and uncertainty.

Anyway, have fun and respect others during these times of social distancing.

And please don’t hesitate to get Out&About – I hope to see you there.