Have you ever wanted to know the effect of adding bicycles to the trailer drawbar or adding a spare tyre to the roof of the car?

Using LoadGood calculations allows users to determine in advance how the placement of what loads in what locations will affect the loads placed on car and/or trailer axles and tow balls.

If you use your car for work, where you carry any loads can impact on the loads you place on your car’s axles – as well as its handling and maximum limits.

If you take the family, food, clothes, drinks, camping gear, surf boards, the dog and kids’ bikes with you on holidays (and who doesn’t) the total weight of all this stuff is one thing.

But, it is where you carry these things in the car; on the car or the trailer; or even in the camper or caravan that can make a big difference.

LoadGood will show you that these items do not just add up to make a new total weight. LoadGood will give you the affected tow ball load and axle loads.

In theory, the manner in which loads are imparted on the tow ball and axles is determined by levers over various pivots (or fulcrums).

What are the Levers and Pivots?

Levers can be considered as the body of the car, trailer or caravan / camper.

Whereas the pivots are, in very basic terms, the axles of the car, trailer or caravan / camper.

LoadGood will show you that the wheelbase of the car has a role to play in all this, as does the overhang of the tow hitch (ball) behind the car’s rear axle when towing.

This application (LoadGood), allows users to enter distance measurements and weights in metric or imperial units.

When I had my camper trailer weighed, I went in full of confidence in the knowing that I had had my Mazda BT50 upgraded with a 3.5t Gross Vehicle Mass (GVM) and a 7t Gross Combination Mass (GCM).

But, I was to be surprised by the load of the trailer on the ball – and the resultant load on the rear axle of the car.

Like many travellers in this situation, my initial thoughts were what can I leave at home and where should I move the stuff I’m carrying to make the required difference to the loads.

Normally, this would mean having a ‘stab in the dark’ and hoping I’d got it right and I was good to go on my next trip. Then again, I could always go back to the scales and see what difference my load shedding and movements had made.

This is when I got to thinking that there must be a quick way to test these load shedding and relocation strategies – at the desktop.

“These calculators have been in use since the end of 2020 and have proven useful to many users. Please let me know how they’ve helped you – dayv@campandtravel.com.au or comment below.”

Head to our Youtube Channel for the videos (4 parts) on how loads and loading impacts on towing.

How LoadGood will save you Time and maybe some Money

LoadGood calculations are grouped in three tabbed pages within the  App, namely:

The LoadGood application can be found on the Android Play Store.

It is important that you note and agree to the ‘Disclaimer’ below when using the LoadGood application.

Some Help Before You Start

In a series or blogs and videos I posted on this webpage, I have stepped through the experience of having my car and camper weighed, and subsequently exploring how loads affect the tow vehicle and trailer depending on where they were carried.

As such, I recommend that you have a look at these first, or after, you set out to understand the results of LoadGood.

A convenient feature of LoadGood is the convenience to select metric or imperial units when entering distances and loads. This recognises the universal nature of the application and its ability to meet the market needs of many campers and travellers in many countries. Description: LoadGood looks at the car’s wheelbase, the distance from the rear axle of the car to the ball on the hitch and the actual or proposed load on the ball from the trailer.

Result: The result of the calculation is the impact that this ball load will have on the car’s rear axle. By using it you will see that say a 250kg load on the ball will be more than 250kg on the axle due to the lever effect of the hitch’s overhang behind the axle. How much will depend on the car’s overhang and wheelbase.

LoadGood will also display the multiplier for your car to provide an indication of how much more a load on the ball will be on the car’s rear axle.

Use: If you are looking to buy a new trailer, you ought look at the car’s axle load capacities as well as the tow ball limits – remembering that the car’s axle already has a load on it. Similarly, if you are moving loads on the trailer you should be aware of their impact on the ball load and the car’s axles. You could also use this calculator when comparing tow vehicles for possible purchase.

By knowing your car’s multiplier, you’ll be able to use it as a ready reckoner or for quick comparisons. For example, I know that my car’s multiplier is 1.47 – so if I have a ball load of 100kg, that would be an additional load on 147kg on the car’s rear axle. 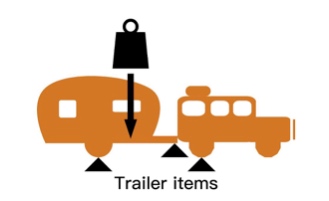 LoadGood also includes your car’s multiplier (determined from Tab 1) to see what may be the impact of these changes on your car’s rear axle.

The third result is the impact of the first two results on the car’s rear axle.

Use: By simply adding or removing an item, the loads and dynamics of the trailer will change – as will their impact on the car. If you are removing something to place it somewhere else on the trailer, you will need to do one calculation to remove the item (entering the value as a negative) and another to add it back in in its new location (the new distance from the axle).

Similarly, if you are adding / removing multiple items, you will need to do each individually and keep a seperate tally outside the calculator. 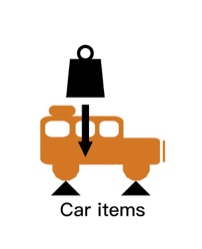 Description: Just as Tab 2 provided some insight into how removing or adding items somewhere in the trailer can make a difference, Tab 3 will display the impact of removing an item (enter the value as a negative) or adding items in, and on, the car itself.

Result: The impact on both the car’s rear and front axles are displayed.

Much of this is very iterative and needs to be repeated as you explore the what-ifs for your situation. By this, I mean if you reduce the load on the car’s rear axle by moving loads in the car you may be able to revisit the loads from the ball of any trailer – and if you change your ball loads you may need to revisit how you pack the car.

Check Your Numbers and Know Your Actuals

As I found out when I was told that my loads were ‘sailing close to the wind’, you can feel bamboozled and feeling alone – and worse still thinking that you’ll get away with any limits being exceeded.

Just remember that, if you have an accident or mechanical failure, your holiday can quickly turn to ‘custard’ and those around you could be severely impacted. Not to mention the attention your car and trailer will draw from the police, insurance companies and lawyers.

You owe it to yourself and your family to explore the numbers and keep safe.

Play with LoadGood and see what you can come up with. But, you do need to get your weights and loads confirmed by driving over a weigh bridge or from those who can tell you your actual weights – not guesstimates.

The results shown in LoadGood calculations are mathematically derived and do not take into account the many variances that can occur in the real world of cars, trailers, travel speeds and road conditions. As such, these calculations should be used only to determine what-if scenarios in the broadest sense and should always be followed up with actual weights taken at recognised weigh bridges. You are responsible for the loads you carry and where they are placed; as well as understanding the capacities and capabilities of your vehicle and trailer – and yourself. If in any doubt ask an expert in the relevant field.