The Mount Moffatt’s traditional owners are the Bidjara First Nation People who have lived here for at least 19,000 years (source: Entrance Sign to park).

There’s also reminders of what later settlers did to graze this land from 1859 (source:des.qld.gov.au) with fences and buildings left behind on the grassy plains and tucked away in the woodland.

As the roads within the park are a combination of sandy, gravel and rocky a high-clearance vehicle is the order of the day with my recommendation being that you have a four-wheel drive.

Winter is the best time to visit – but the nights are cold. We had the mornings drop down to -2.5 Celsius when we visited in July (Australia’s Winter). 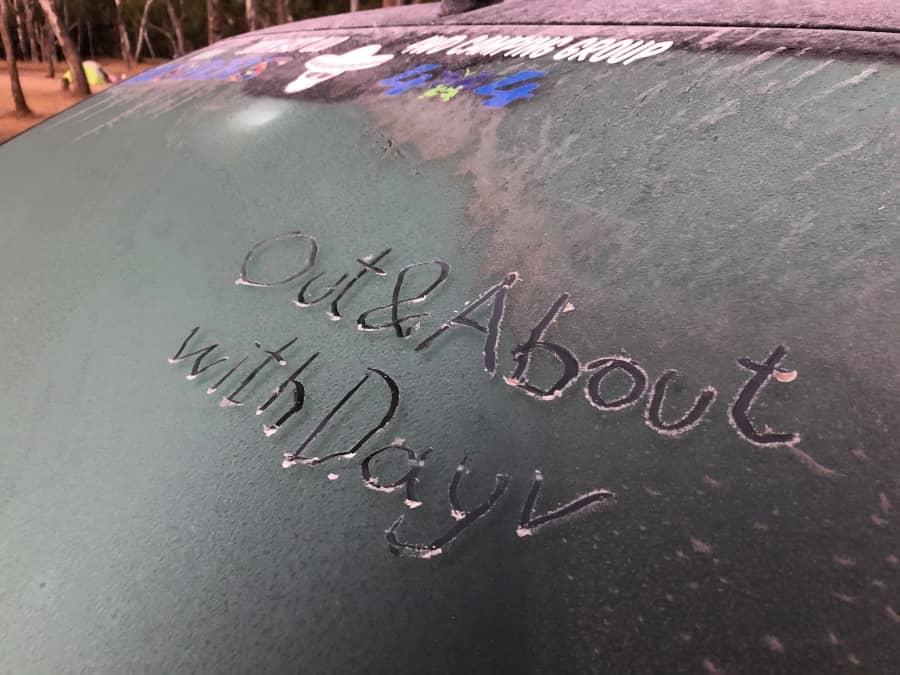 Temperatures in Summer are too prohibitive to make this a comfortable trip and the rains will most likely shut the park with flooded roads.

Mount Moffat National Park is located in the Central Highlands of Queensland some 250 kilometres north of Mitchell – that’s about a 3 hour drive with the northern third of it on unsealed gravel road with the occasional washout in the floodways to catch you by surprise. 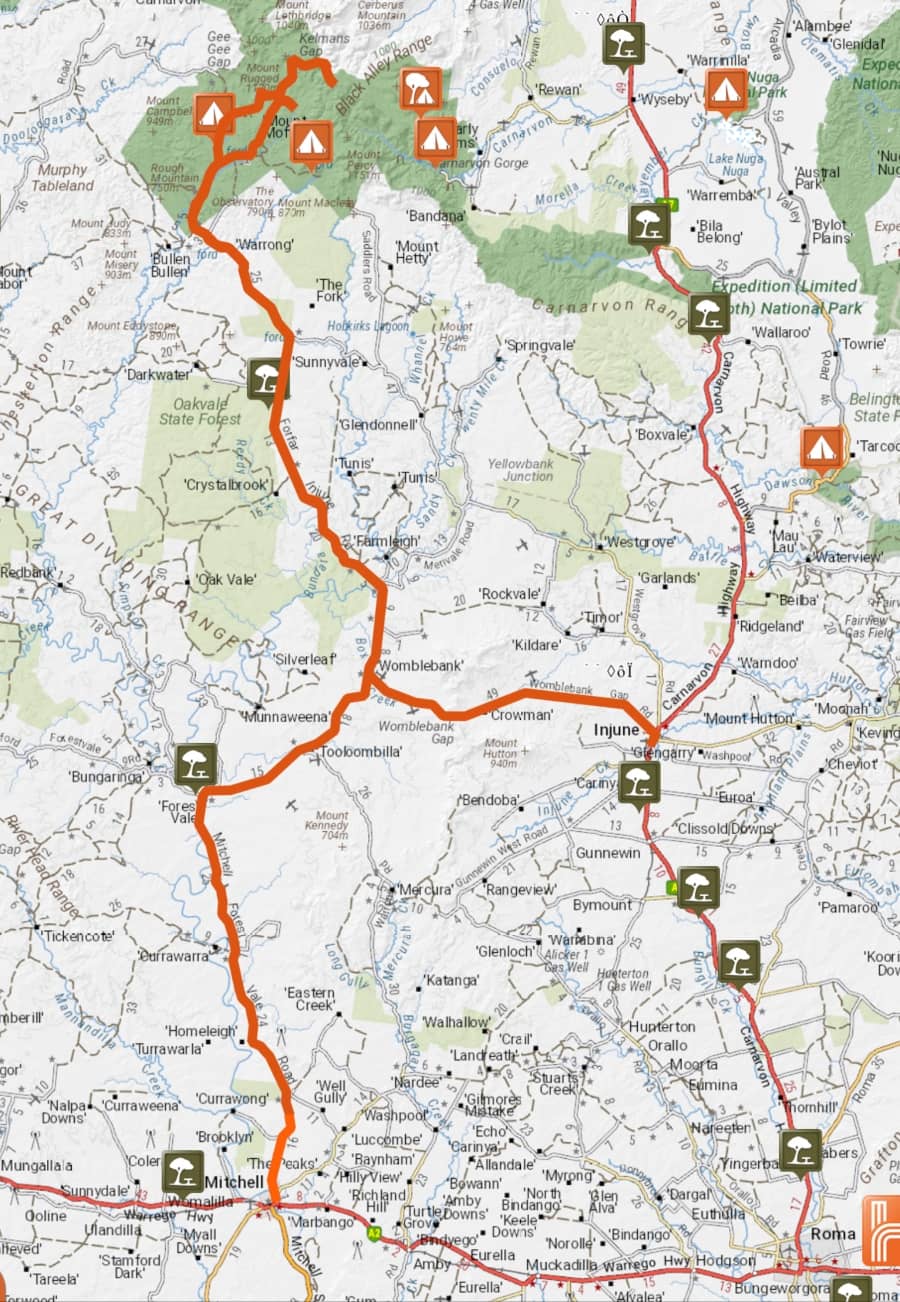 For me, towing a Stoney Creek Camper, I knew that I had a 500 kilometre range and I covered this aplenty by carrying a couple of 20 litre jerry cans to give me an extra 250 kilometres or so.

However, if you travel in, and out, via Injune (an hour north of Roma and take the Womblebank Gap Road west to join the Mount Moffatt Road) you can shave about 200 kilometres off the return trip when refuelling at Injune (travelling via Womblebank Gap Road and crossing the Great Dividing Range at approx 620 metres above sea level).

For the Brisbane based traveller, the total trip out to Mount Moffatt is approximately 700 kilometres. This makes it a big day’s drive that, in my books, needs to be broken up. Naturally, its also a big drive home after a busy trip away.

For me, I’d have no problems taking a break for the night at Archers Crossing, Chinchilla; Dogwood Creek Rest Area, Miles; Judds Lagoon, Yuleba; the Showgrounds at Wallumbilla (if you’re self-contained; somewhere in Roma; or the Showgrounds or Rodeo Grounds at Injune. Naturally, the closer you get on your first day makes a shorter drive the next and more time in the National Park – but don’t drive tired. 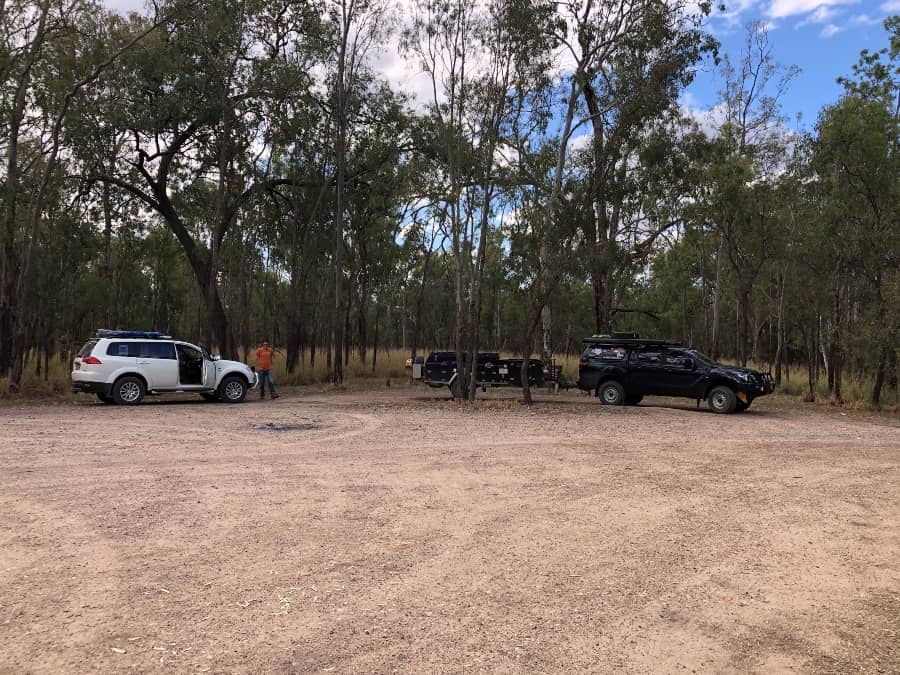 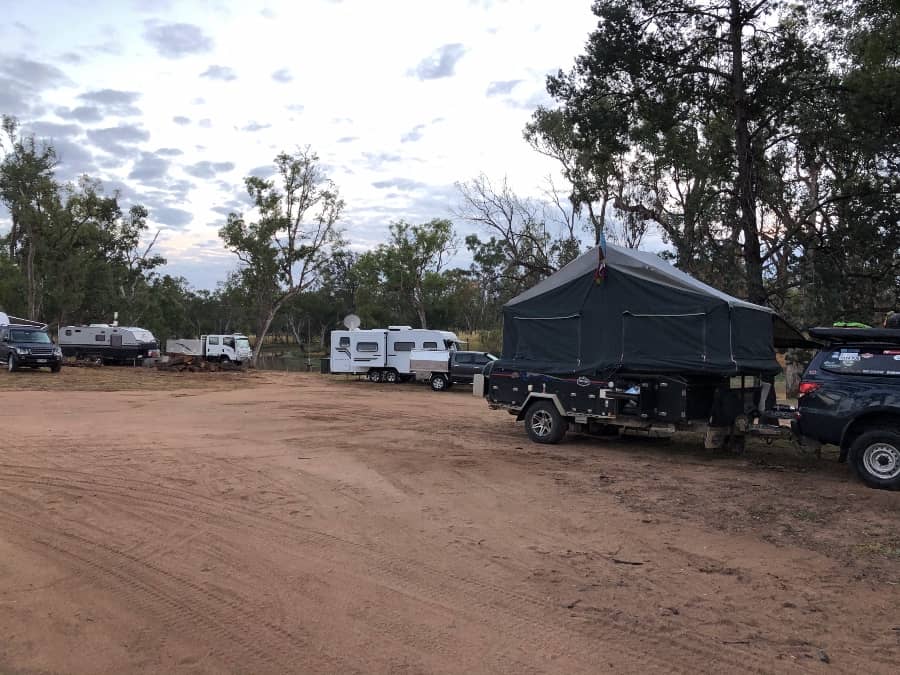 My hot tip however, is to come into Mount Moffatt National Park later in the afternoon so that you can get a glimpse of Cathedral Rock (at the entrance to the park) reflecting the sunset off its rugged sandstone cliff face. Don’t make it too late though, because you’ve still got another half-hour or so until you get to the closest campgrounds. 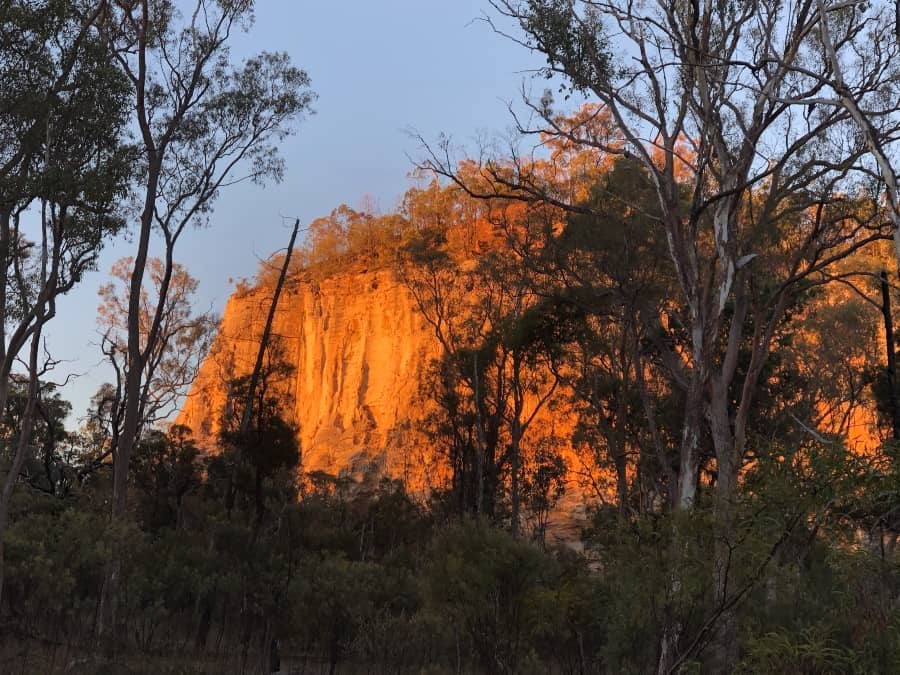 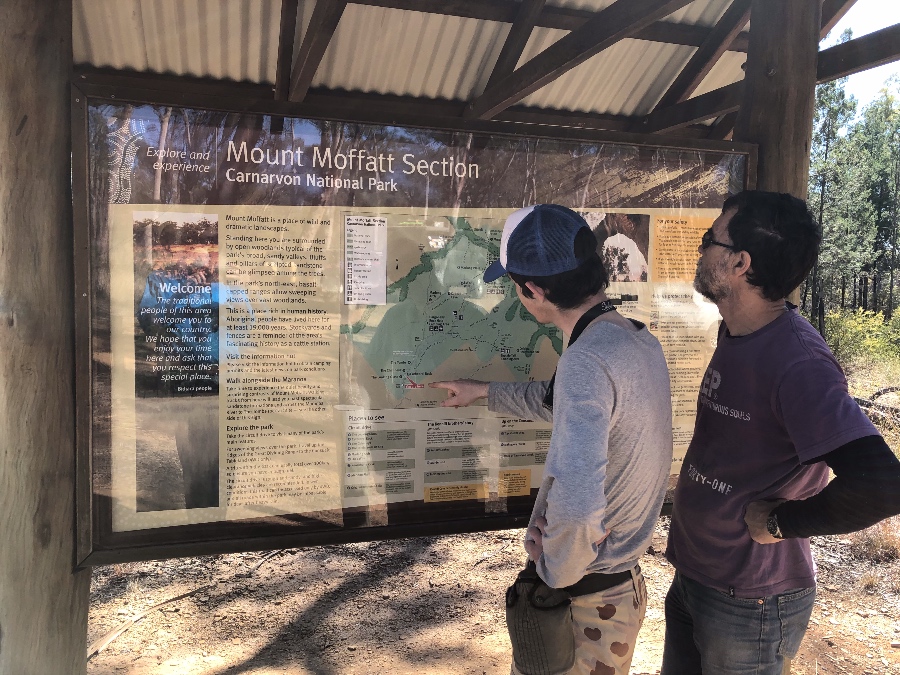 There’s four campgrounds within the park. They are:

This camp ground offers campsites on the banks of Marlong Creek and its many rock pools. Toilets are available here but no showers. The National Parks website indicates that it’s not suitable for caravans but I did see three ‘off-road’ caravans happily camped there and its perhaps no more difficult to get to than the option at West Branch. 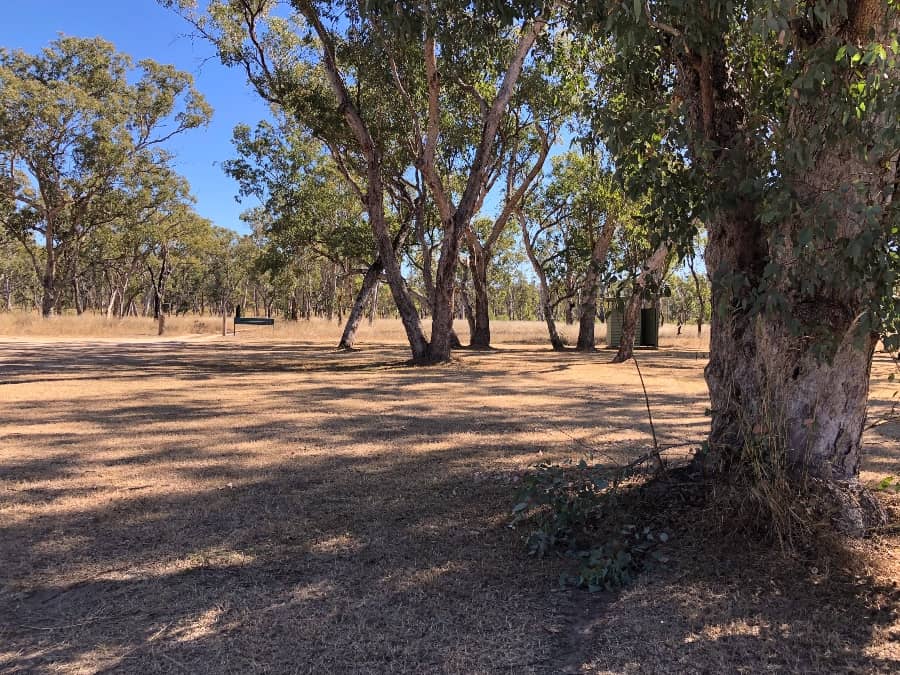 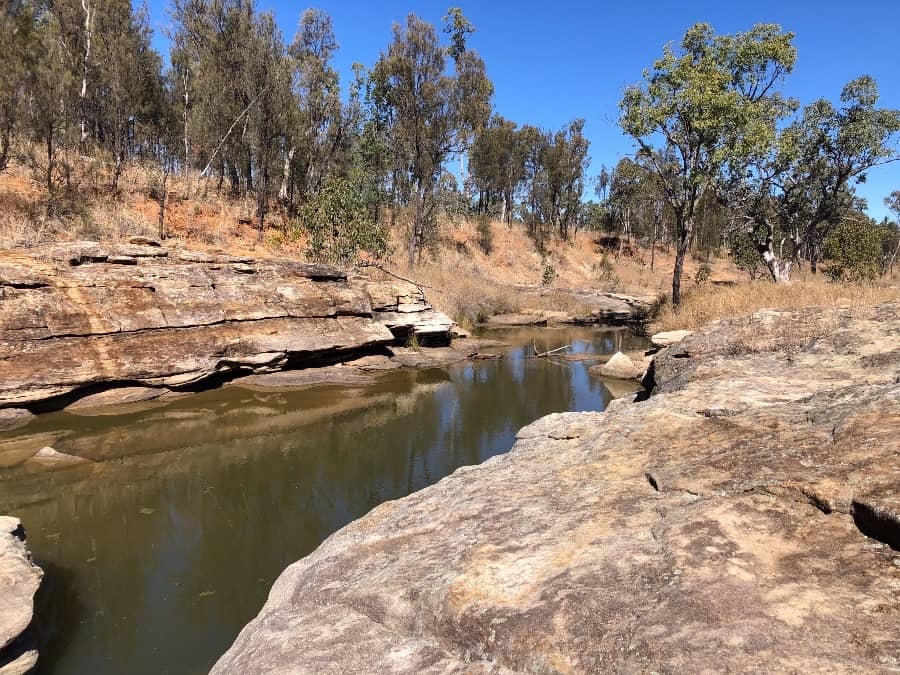 If you need it these guys probably have it!

This ground is located on the banks of the western arm of the Maranoa River. Here, you’ll find a large open area with large shade trees and several fire rings and a picnic table. There’s also a toilet, but again no showers. Tank water is available, but you’ll need to let the tap defrost on cold Winter mornings. Access for caravans here is a little more limited with a couple of sandy sections to negotiate. This campground is also one of the stops along the Carnarvon Great Walk and you’ll have an opportunity to discuss hiking tips with guys and hear how they get Out and About with minimal gear. 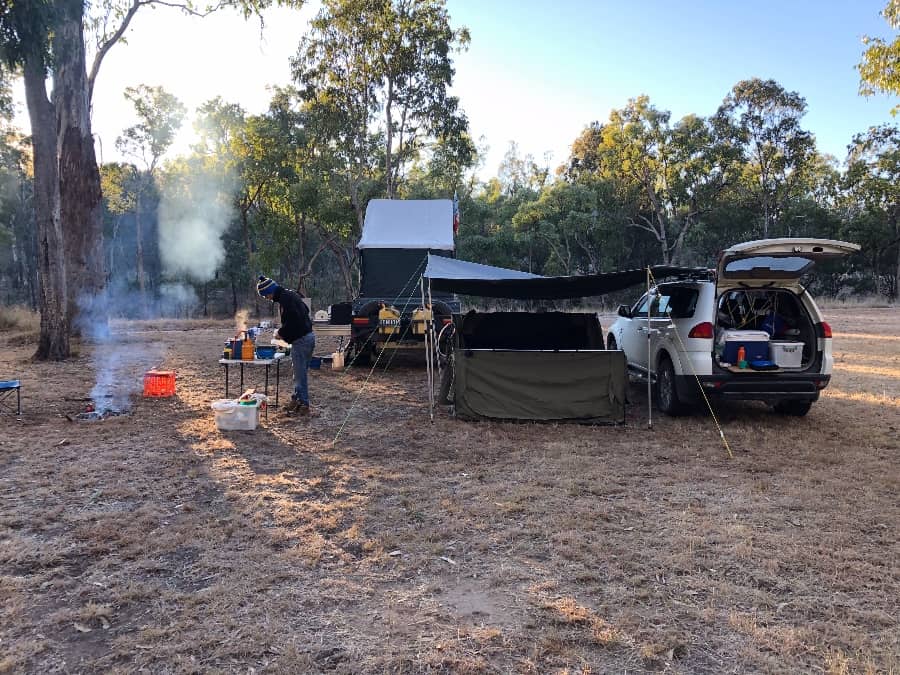 Camping at the Rotary Shelter Shed is limited to tents and swags and offers a toilet and fire pits. But, the views form up here (some 1,000 metres above sea level) are well worth the drive (if you have a four-wheel drive). Just be aware though that while the view from up here is phenomenal, its exposed location could mean that a wind storm, cold front or rain would make this spot very unpleasant. At least it has a picnic shelter to seek refuge if needed. 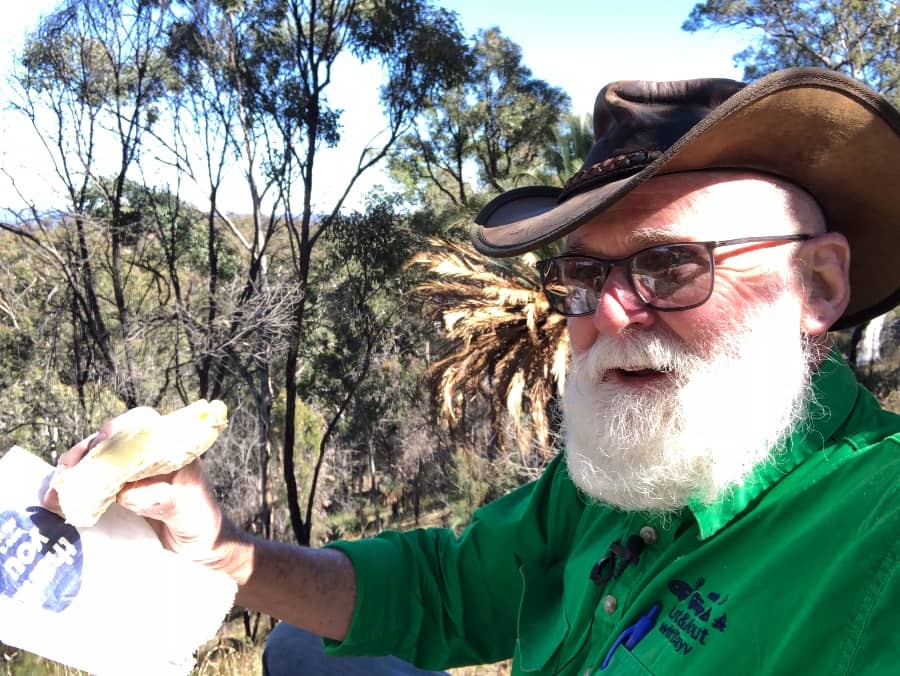 We didn’t make it to the Top Moffatt Campground, but at 1,097 metres above sea level and only permitting tents and swags, I would suggest that this too is one site no to be taken lightly.

To me, one of the selling points of Mount Moffatt National Park for the camper and traveller is the fact that you can drive around the park and do short walks as it pleases you.

In contrast to its neighbouring Carnarvon Gorge National Park, you can poke around Mount Moffatt in your four-wheel drive and stop for that fully catered picnic or lunch at tremendous lookouts or in the Mahogany Forest with its rare Silvertop Stringbark and tall Cycads taking you back to Jurassic times. 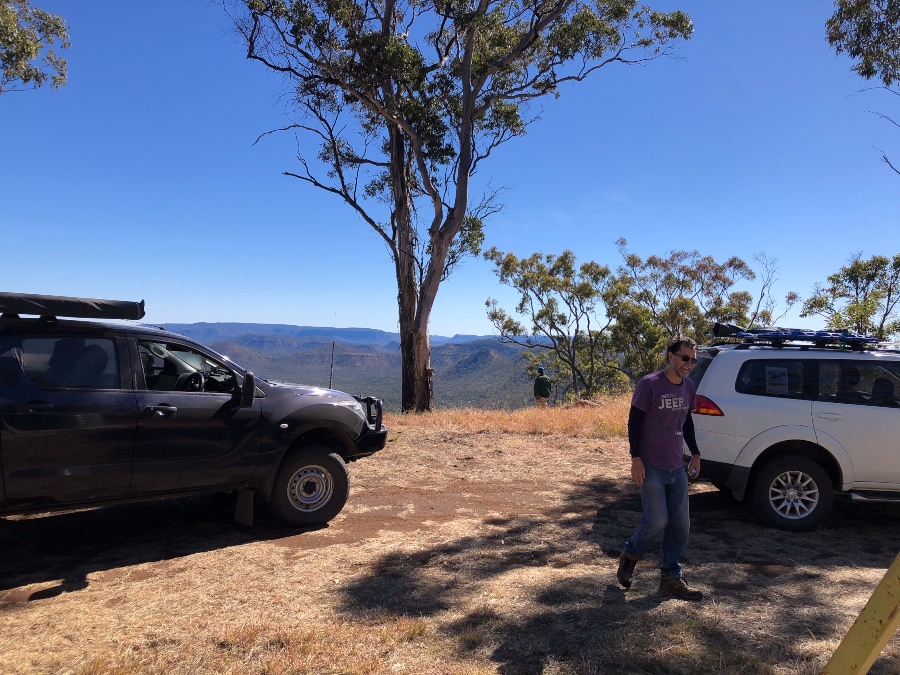 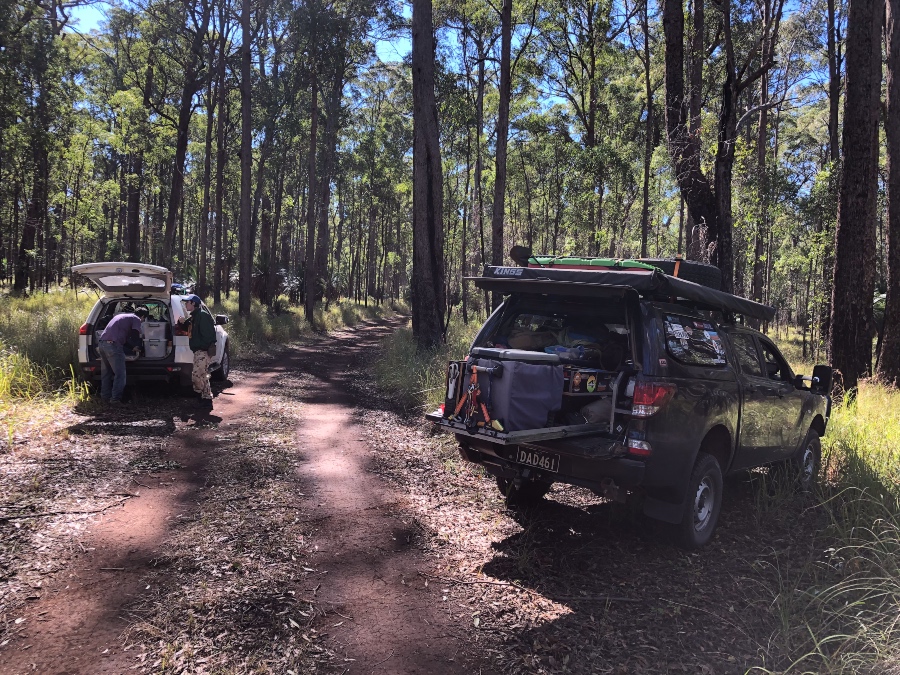 The two drives we took were the Circuit Drive and the High Country Drive.

Entry into the park is via the Circuit Drive and you have the choice to head east to West Branch or west to Dargonelly Campgrounds. If you’re coming into camp in the afternoon, you may wish to head straight for camp and poke around the next day (or perhaps the day after that or the next…).

The drive that you just have to do if you have a four-wheel drive is the High Country Drive that takes you on a steep steady climb to Rotary Shelter Shed, the Top Shelter Shed lookout at around 1,200 metres above sea level (no camping), Mahogany Forest and the Head of Carnarvon Creek. 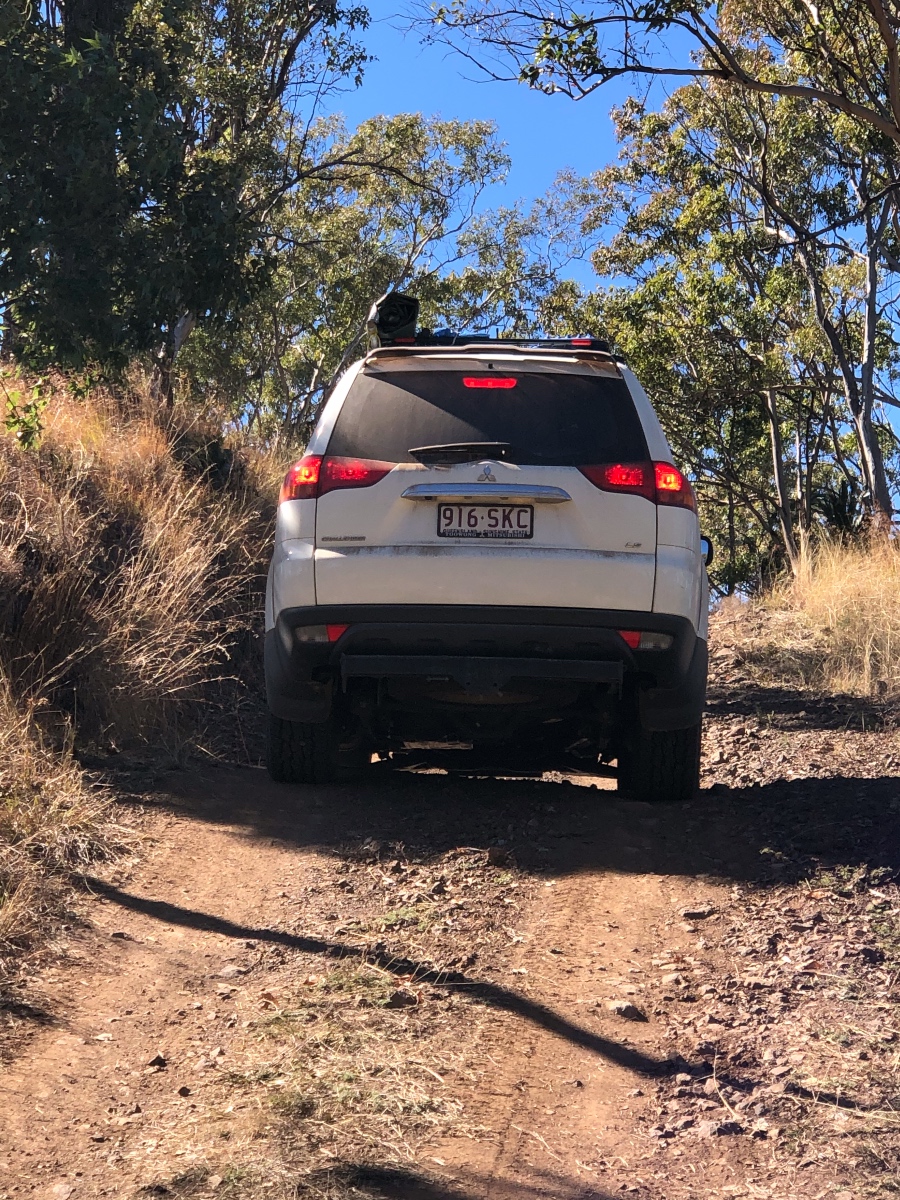 There’s also the Kenniff Drive that takes you out to the sites where the horse stealing and cattle-duffing Kenniff brothers allegedly murdered a police officer and property manager and later incinerated their bodies. We decided to save this trip for next time (source: Entrance Sign to park).

If, on arrival, you drive in to West Branch, you can do the eastern section of the Circuit Drive as you drive out to exit the park. Just plan your time, because it’ll take you most of the morning to do the sights along the way and makes for full day’s drive by the time you get to Roma or Injune.

Disclaimer:- We may receive a commission from these links

Be sure to visit Marlong Plain where you can see how attractive this area must have been to early graziers; solitary sandstone outcrop named after Lot’s Wife from the Bible; Kookaburra Cave which is a short walk from the road and offers some great First Nation People rock art; Marlong Arch which is just that carved from the surrounding sandstone. 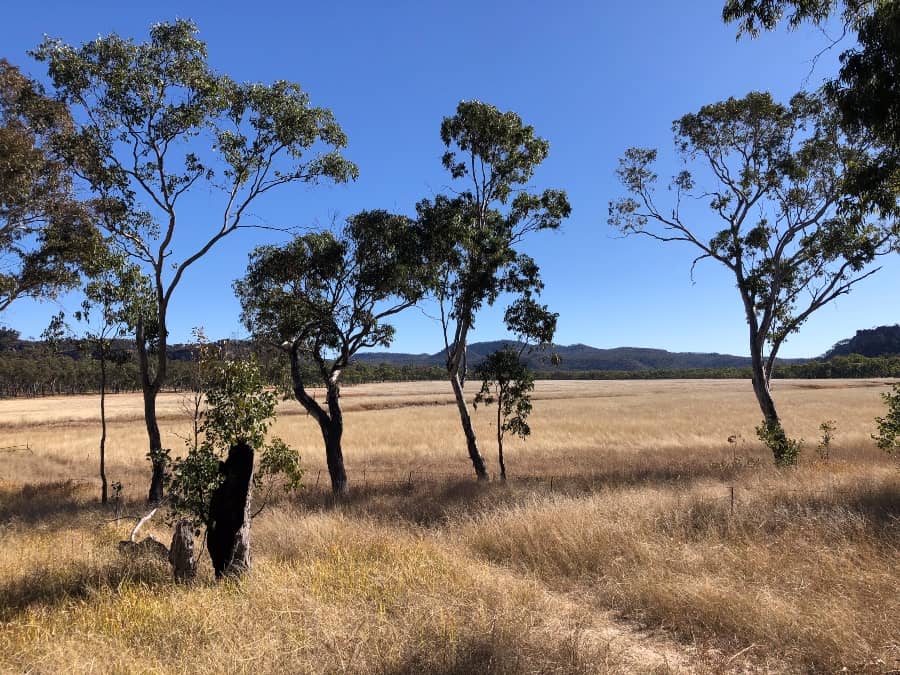 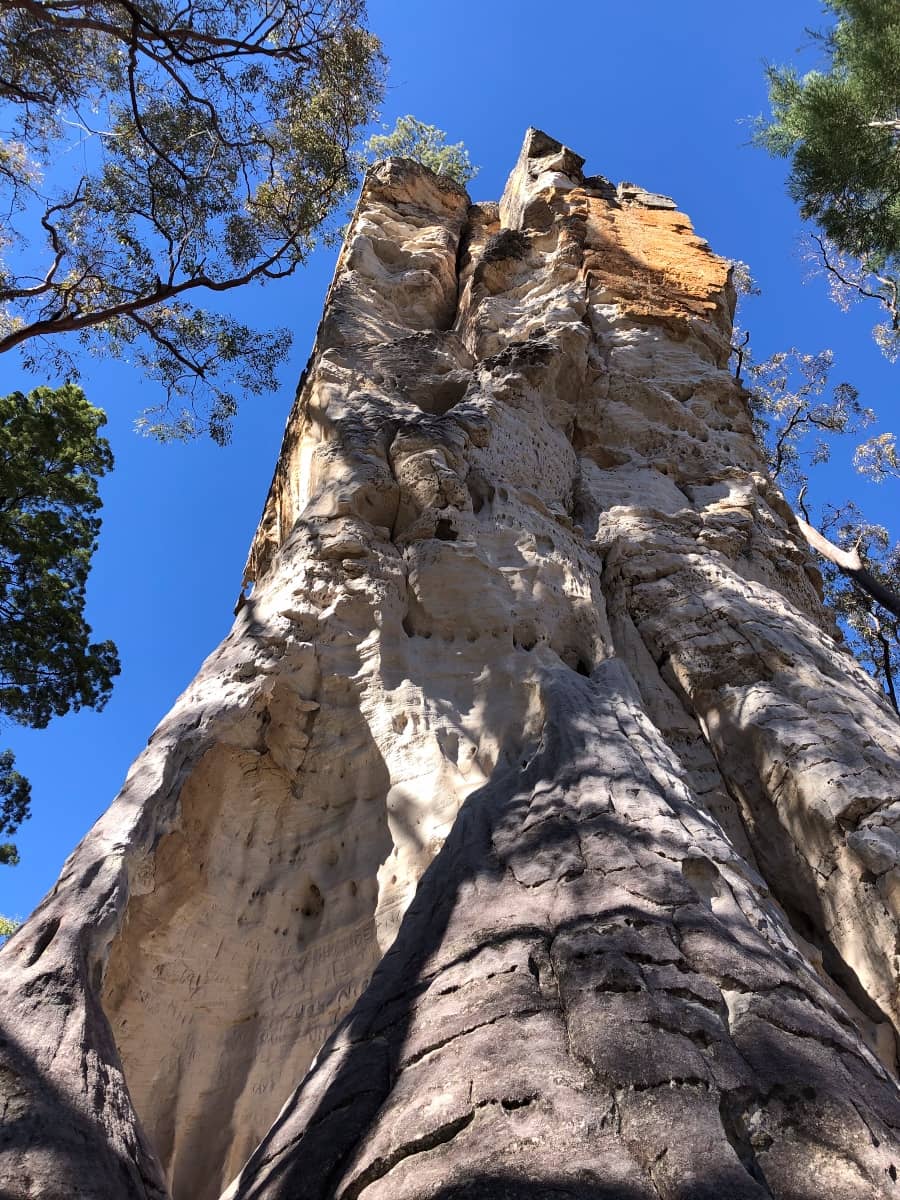 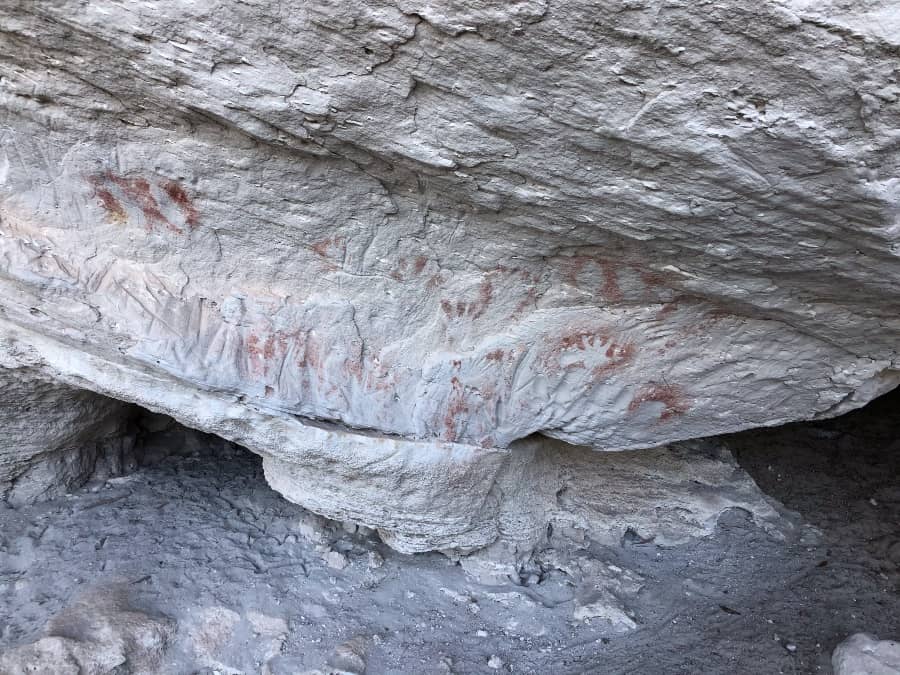 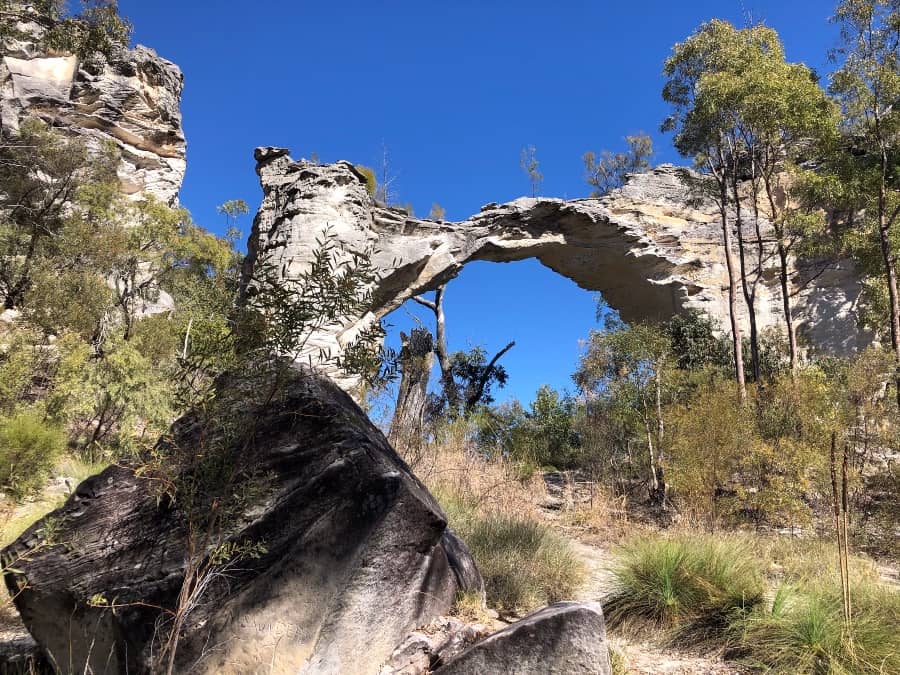 Retracing your steps as you exit the park you can stop at the Sandstone Day Use Area and do the walking trail to The Chimneys, The Tombs and The Looking Glass. It’ll take you about an hour-and-a-half to two hours to walk the 6 kilometre circuit track to take in all three features – or you can do the 4 kilometre return trip out to The Tombs and back in an hour or so. But, you will need to factor in time to take in the history and significance (as well as contemplating how the First Nation People were treated) of The Tombs. 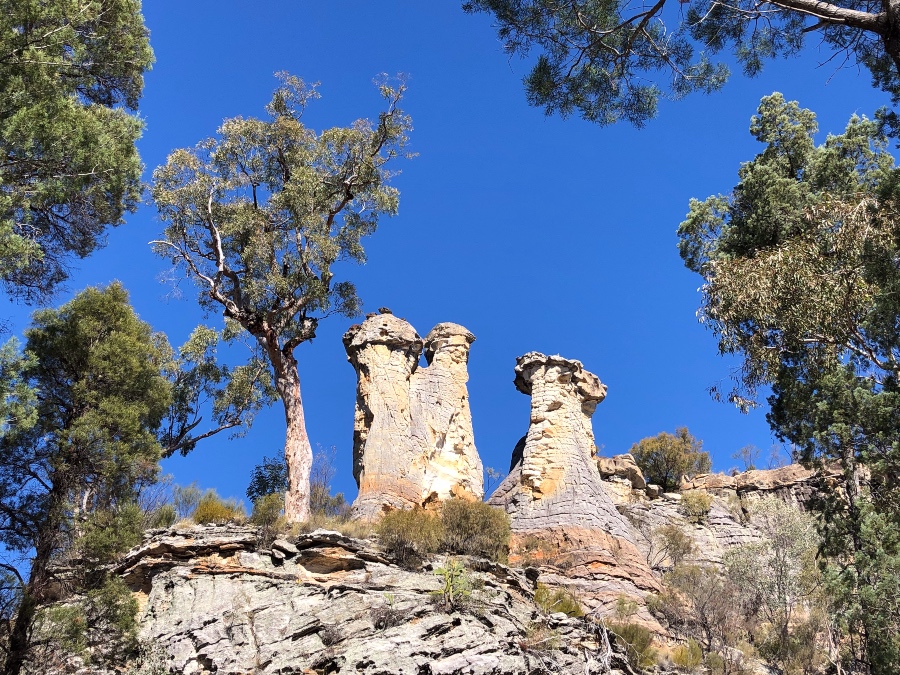 If you have the ability to stay a little longer at Mount Moffat, you could even do the Sandstone Day Use Area on a separate day and spend a good part of the day there and return back to camp for a rest and to get that fire going for a big cook-up.

If you’re thinking of planning a trip to Mount Moffat, have a think about whether this is the destination or if it’s a side trip as part of a bigger trip.

If it’s a destination trip from Brisbane or South East Queensland, be sure to plan your trip out and your return trip back. Having said that , I know that many will say “Oh, I’ll be right…”.

If it’s a side trip you’re after, we did this as part of our bigger trip to Charleville. But you could roll this into a trip to Carnarvon Gorge (as a contrast) or as part of a loop further out to Tambo, Springsure and perhaps even take in Blackdown Tableland. The World is your Tent.

We spent two nights in the park. Arriving late at West Branch and hitting the High Country Drive the next day. The second morning saw us leave the park travelling along the Circuit Drive anti-clockwise to take in all the remaining sights – arriving in Injune in the late afternoon that day. So, that’s a three day round trip from the Warrego Highway. Slow perhaps – but I’d happily take longer.

Big thanks to a great mate, Lakey, and his son Nathaniel for a great trip away. Let’s do it again – soon.