Pix by Out&About by Dayv

If you have a look at the map of  Brisbane and its surrounds, you’ll find some big islands to its east. The big one to the north is Moreton Island (the world’s third-largest sand island), the one below that is North Stradbroke Island (the second largest sand island in the world – behind Fraser Island) and the one below that is South Stradbroke Island. The stretch of water between these islands and the mainland is known as Moreton Bay.

Redlands Coast is the area which includes Stradbroke Island, the islands west of it and the part of the mainland from Thorneside down to Redland Bay and west to Capalaba. Cleveland is perhaps the hub of the region with train access to Brisbane city and ferry access to the popular Stradbroke Island.

The First Nation People of this area (known collectively as the Quandamooka People) have traditional names for all these places and these are being increasingly used and adopted. For example, Stradbroke Island is often referred to as Minjerribah.

The Redlands Coast prides itself on the culture of the Quandamooka People, its natural wonders, coastal adventures, tracks and trails, islands (large and small), villages, arts, heritage, food, beer, and wine – marketing the area as ‘Naturally Wonderful’.

If the south-east corner of Queensland is currently pushing for visitors to stay an extra day, I reckon that the Redlands Coast should at least be aiming for people to stay a week – and perhaps come back for more. If you take a few minutes to sit down and relax, there is so much to see and do in the area.

Those who have driven and have a van or tent there’s places I will expand on in separate blogs with links of where to stay and what is on offer. 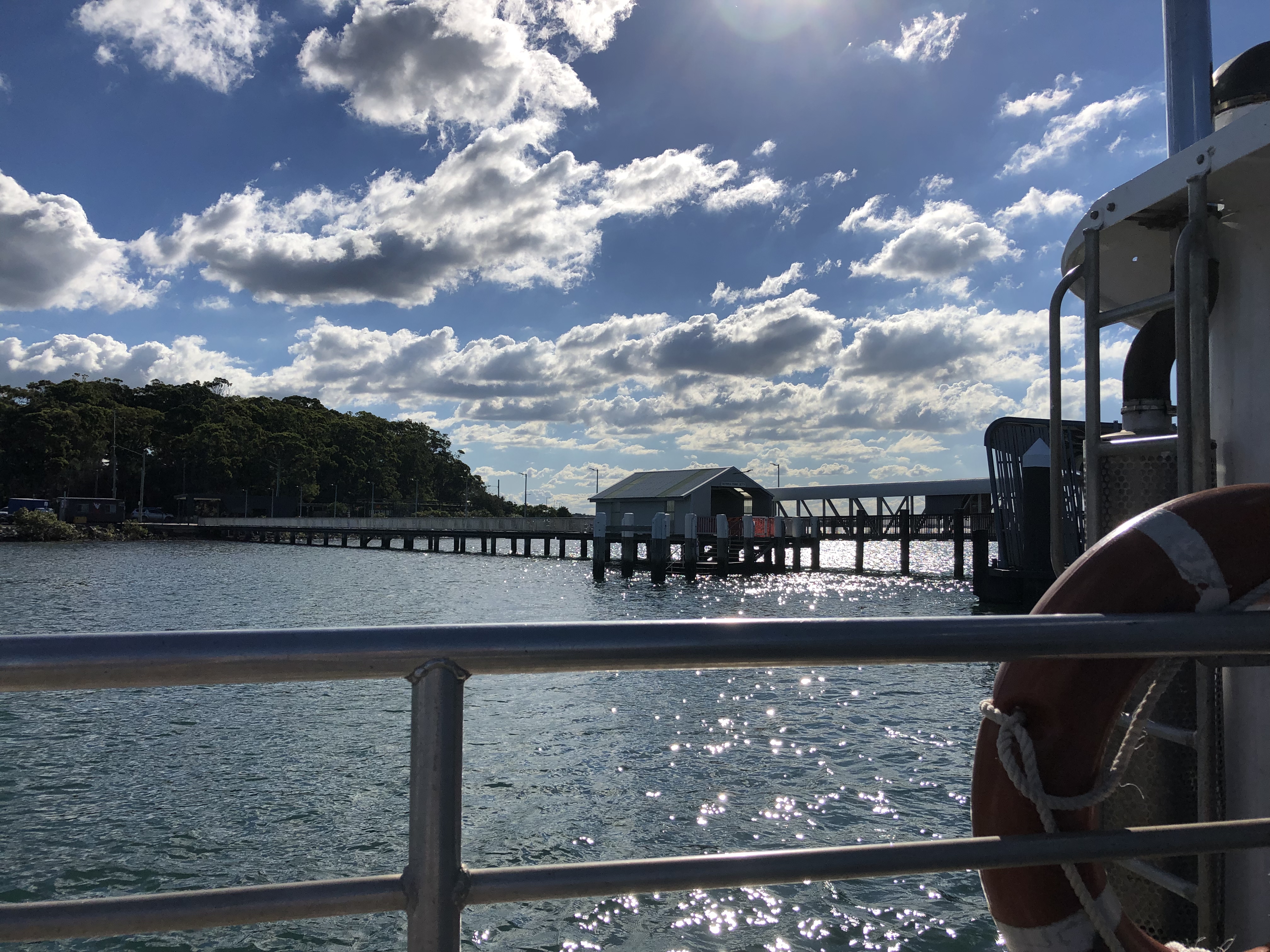 Feel like a ferry trip from the mainland to one of the many islands around Redland Coast.

My tip would be to catch the train (an hour’s ride), or perhaps drive (about 45 minutes), down to Cleveland and start with a chat to the friendly staff at the Redlands Coast Visitor Information Centre at the Raby Bay Harbour Precinct on the corner of Shore Street West and Masthead Drive  (what3words reference link). If you’re driving or towing the van/camper parking can be a little difficult in the area so check out the roadside parking on the south side of Shore Street West just past the Visitor Information Centre.

Then, after your chat, have another chat with the staff at a local coffee shop while you relax further and have a flick through the pamphlets, brochures and booklets you’ve collected in your travels and plan a couple of activities close by – like a drive out to the old Cleveland Lighthouse where you can take a stroll and the kids can play on the swings and run on the grass, have feed at the fish and chip shop or have an ice cream, oh… and be sure to check out the old pub on the way or on the way back (Grand View Hotel). Again, parking is tight out at the lighthouse so you may need to stop short and walk down. Then there’s the houses to look at on the way – with water views to the east and west.

Gee that sounds like a whole day in itself – if you do it properly.

Then, perhaps, tomorrow you could take a drive down to Victoria Point and take a $10 return ferry ride over to Coochiemudlo Island with your togs (swimsuit) and towel, and have a quiet stroll through the trees and walk on the sand. Again take your time and enjoy a lunch or snack and drink at the Curlew Cafe where life is sooo much slower – in a good way. You could even take a moment to wonder what the people at work are doing – yeah… Nah. Then, it’s a relaxing ferry ride back to Victoria Point with the sun in your face as you ponder falling asleep for the 15-minute trip.

Redland Coast offers so much

If you’re sick of the beach and water thing, you could contemplate a breakfast at Sirromet Winery in the Redlands Coast at Mount Cotton and perhaps take a tour, then lunch and watch the sun go down again as you lose another day.

I told ya, there was a week in this – and I haven’t even started on the bush, the walks, the food, the craft beer breweries, and all that North Stradbroke Island holds.

Out&About with Dayv takes a day trip to the island. After getting off the ferry, across from the mainland you instantly feel at one with nature.

Where can I camp on the mainland?

It is fairly safe to say that, notwithstanding the extensive history of the area, the mainland area of the Redlands Coast has not been a significant travel destination for the people of Brisbane or its visitors. Much of the camping has been on Stradbroke Island with its pristine beaches, beach driving, picturesque headlands, surfing, whale watching and freshwater lakes. As a result of this, tourist site caravan parks and camping are somewhat rare on the mainland – unless you know where to look and you’re prepared to look outside the box.

When you need room this is your tent. Head to Tentworld by clicking on the photo.