The story of the swag

Australia has a word “swagman” and a “swagman” often carried a “swag”. These days we don’t see many traditional “swaggies” wandering around Australia, but we still have the the Swag.

As a family of four, we each had our own swag and rolled them out around the campfire, in the cooler areas and if we were camped overnight in FNQ – Far North Queensland, we would roll them out and drift off to sleep with our uninterrupted view of the night sky.

As time rolled on and the kids grew into bigger kids my definition of comfort became a little more defined. No longer was I prepared to throw the kids and the swags in the back of the 4wd and head out.  I wanted to be off the ground and began camping out of a camper-van.  Now this was pure indulgence and luxury until the novelty began to dull and we sold the camper-van and now own a pop up top caravan.

What is the  story of the Swag in Australia?

Life was not always as it is these days.  There was a time in Australia when work was short and as such an itinerate bunch of men wandered the continent picking up jobs along the way.  The Swagman is celebrated in verse, with most of us being familiar with the works of Banjo Patterson. The 1800’s talk of the Swagman or the Swaggie.

Back in the 1800’s the Swagman was normally a seasonal worker, such as a shearer. Australia is said to have been built on the sheep’s back and each sheep needed to be shorn. Back then many Swagman would sleep under the stars. His bed was normally a piece of canvas which he would roll out and sleep upon. He would have some blankets which served to keep him warm.  The next morning this swagman would roll up his bed or “swag” and if he was to move on to find another job, he would carry this swag on his back. 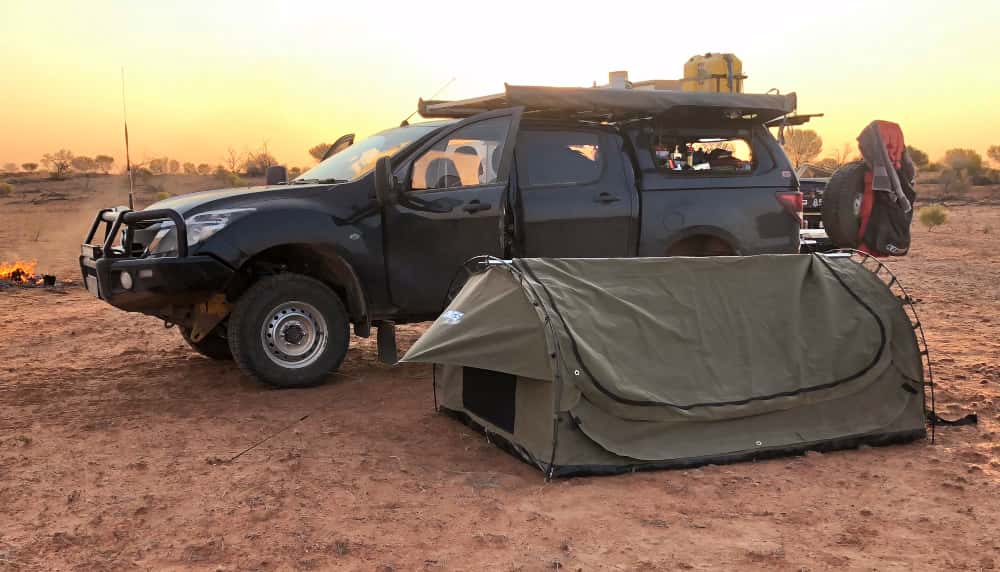 Fast forward to the Great Depression

History and the stories of my grandparents who have now passed indicate this period of time was tough. The year was 1929 – hmm how things have changed in less than 100 years. Men hit the road and took their swags, in search of work.

The swag has really evolved since the swags of yesterday.

Today companies have turned the swag into in some cases what resembles a small tent.  The tradition of the swag lives on, but with far more comfort.

I’ve been poking around the swags on offer. I have gone the full circle and want to experience the ground under me and the stars above. BUT, and there is a but, I don’t want to be freezing cold and I don’t want to feel every stick and stone. Is this possible?

This blog is not a recommendation to purchase a particular brand or style. This blog is to give a perspective on sleeping out in a swag, close to nature and under the stars. Of course, I do demand that the weather is kind and there are no crocodiles, snakes, spiders or anything else that will do me harm.

Tentworld has a massive range of camping goods, including a great selection of swags.

My most vivid swagging memory

North of Port Douglas we pulled up at the beach. Anyone who has lived or travelled to the Far North of Queensland knows the pure beauty up that way. Our children were 5 and 6 and very accomplished campers.

We staked our claim on the beach and set up a small camping spot. Our swags were laid out and the kids were already asleep, each in his own swag.  I was counting the stars – the sky was clear and the stars bright.  The waves were lapping up on the beach and I was beginning to drift into a world of bliss. Until – My husband made the remark – “I don’t think there’s any crocs up this far north”.

Guess who didn’t sleep much that night?

Big Swag Tip – the most expensive is not always the best, there are a huge range of entry price points – hope to see you out&about.